Fairy Wings Designed by Me 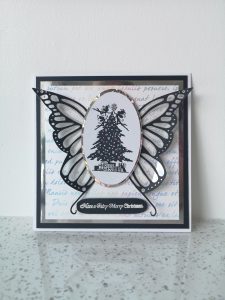 I had an idea yesterday about having some fairy wings featuring across a card, ideally in 3D.  So I thought I’d have a go at making them myself.

To start with I drew out a single wing, without too much detail because I knew that would be more complicated to cut.  Once I had created the basic shape in pencil I decided to have a go at designing it with shapes on the software called Canvas that Brother Scan n Cut supplies online.  It was much easier than I imagined, and soon I had what I felt looked like a fairy wing!  To make a pair, all I had to do was copy this one and flip it so that it appeared the right way for a left hand wing.  Voila!  I had a pair of fairy wings.

So I resized them, because I originally created them in large format, to fit nicely on a 6 x 6 inch card. 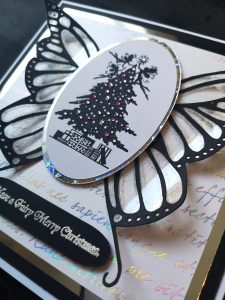 Closer look at the wings

After layering up some black card, followed by some silver mirror card, then a very pretty script reflective card on to my white card blank I was ready to stick on my wings.

Wings at the ready, I stuck them down on to the layered card just using the glue on the inner edge of each wing.  Once glued firmly I gently curled the outside edges towards me slightly.  This lifted them away from the card as you can see from the photos.

To finish off the card I cut out two Oval Shapes, one slightly larger than the other in a pretty star mirror card.  The plain white smaller oval I then stamped up with Christmas Eve, one of my favourite Christmas Stamps from Lavinia Stamps.  I then stuck the stamped smaller white oval into the centre of the pretty larger oval, and then used sticky foam pads to stick it in between the wings.

For a sentiment I cut out a long narrow oval in black card, stamped it with the Lavinia Stamps “Have a Fairy Merry Christmas” stamp in Versamark for Embossing.  I then heat embossed it with Wow! Vanilla Sparkle.  I do need to practice my embossing to get better results here though I think! 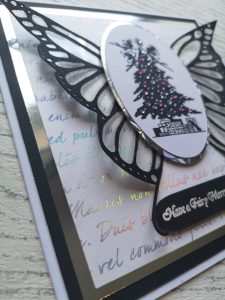 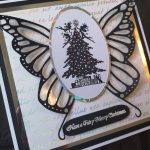 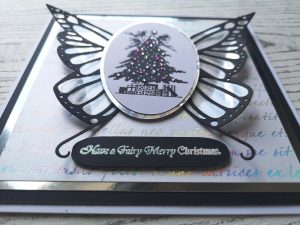 Shown from the bottom edge

I finished her off by adding a tiny splash of colour in the form of tiny gems to the Christmas Tree in silver and shades of pink.  I would have liked to use Green and Red gems, but I didn’t have any.  I must get a stock before Christmas!

So hoping you like it.  I’m now debating resizing the wings and cutting them much bigger for something different, yes, I will be looking at lots of ways to use my new cutting file now!

I’m giving this blogging thing a better go the past two days since I sure do need the practice!  Hoping I will be back soon.